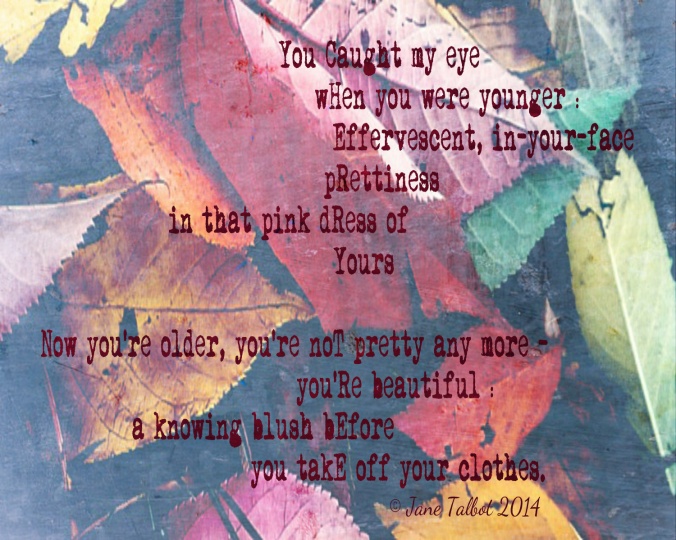 For today’s adventure, I tried my hand at writing my very first acrostic poem. An acrostic poem is a type of poetry where the first, last or other letters in a line spell out a particular word or phrase.

I chose to use “other letters in the line” to spell out the theme of my poem : Cherry Tree. I have capitalised the relevant letter on each line. If you scan my poem from top to bottom, my acrostic poem spells out CHERRY TREE!

I’ve been wanting to capture the spirit of the cherry tree for some while now. Its blossoms captivated me in Spring, but during the summer months the cherry trees sunk into the background , unable to compete with other flowers and trees. A part of me wondered why people would plant a tree that only held its beauty for a very short period of time. 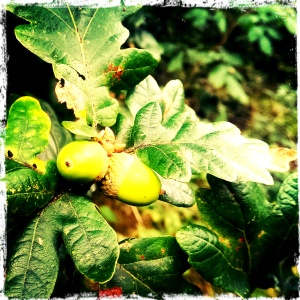 Today, I returned to Portglenone Forest with my dog. The floor was damp with mulching leaves; the fallen acorns had been ravaged by local predators; and the beech nuts had been squelched open by heavy-footed walkers. I had the sense that Time had picked up its pace, like a runner in a race that had caught sight of the finishing line : the Winter threshold is almost visible,

There’s a part of me that’s quite sad that my haiku adventures are coming to an end. I planned to write 30 for my self-publishing adventure, and today is haiku 29. The process of writing haikus has brought me closer to the outside world and brought me closer to my inner world. I feel more present, more aware and more connected. I’m noticing much more and I’m appreciating much more. And I’ve slowed right down.

The writing process has helped me to explore, and realise,  my creative potential, and it’s encouraged a sense of growing confidence in some capabilities that I’d forgotten I possessed! Haikus have woken me up. That’s the best way of putting, I think. Haikus rouse you from the sleep of remembering and bring you into the aliveness of presence. I didn’t realise that 17 syllables could have such power!

I’ve chosen to write a haiku about the acorn today – its associations with potential and growth seem fitting for this part of my haiku journey. You can read my poem here, and I read it out loud on today’s video blog too. 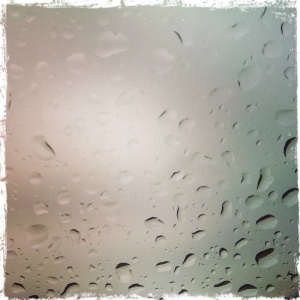 Today’s been a really grey and wet day here in Northern Ireland. When I took the dog out for his walk this morning, I looked up the sky, but it didn’t look far away at all : it was like it was nose-close. It was like it was threatening me! And it wasn’t just “one rain” :  rain, it seems, is a powerful collective, capable of synchronous action. It’s more of a “they” than an “it”.

It’s the kind of weather that would give you a headache, you know? The strangest thing of all though is that when you’re inside , the sound of falling rain is actually quite comforting!

What I’m learning through writing these haiku poems is that it’s the more familiar things (like rain) which I’m finding difficult to capture or “edge closer” too. To touch the nerve of the thing I’m describing, I’m having to cut through swathes of preconceptions and memories. I want to make sure that I’m describing the rain I experienced today, rather than old memories of rain, if that makes sense?

So today’s haiku is called Rain and you can read it here. You can also listen to me read it out loud on today’s video blog. 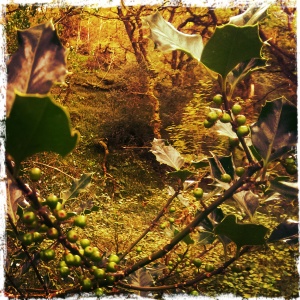 Yesterday I took my dog for a walk in Breen Wood, near Ballycastle. It’s one of the few surviving ancient woodlands in Northern Ireland ; oak trees have been on this site for more than 200o years.

Many local forests (such as Portglenone) were plundered in the seventeenth century but not this one. People think that it wasn’t touched because of its association with fairies (its name means fairy palace in Irish) : if the forest was harmed, whoever cut the wood would have expected bad luck (or worse!)

The feel of Breen Wood is very special – and completely different to the feel of Portglenone Forest. It feels as old as it looks. It is dense, lush and holds a “far-away” quality to it.. almost like you just stepped behind a curtain. I also think it has its own micro climate. Autumn is not as advanced in this place – but it’s definitely creeping in.

As you’d expect, there are a lot of oak trees. In fact, I don’t think I’ve seen so many oak trees in my life! But what I didn’t expect was the proliferation of holly – it was everywhere. Not many of the holly trees were in berry, but I did find one. 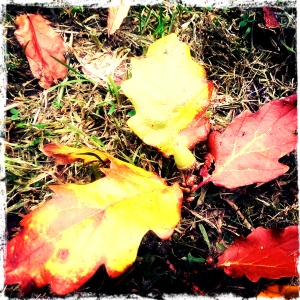 Reading a bit about the holly tree, I discovered that only female trees bear fruit, and the green berries will turn red as we move closer towards Winter. I also discovered, when researching the lore of the oak tree, that the holly and the oak are locked in an eternal symbolic battle cycle. The “Oak King” symbolises the waxing year, and the “Holly King” symbolises the waning year. As the holly berries begin to turn red, heralding the arrival of the darkest months of the year, the oak sheds its acorns and prepares to sleep before the Battle Of Mid-Winter. The Oak King always wins the battle for lengthening days – and he always loses the Battle Of Mid-Summer, sacrificing himself so that life can be renewed.

Today’s haiku is about the holly tree, and you can read it here. I also read it out loud in today’s video blog. 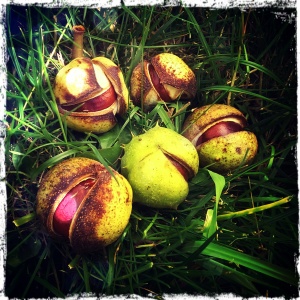 Yesterday’s seed collection and planting adventure inspired me to write a haiku about the horse chestnut tree. As I stood underneath the tree, I noticed how its leaves look like large hands and how the casings of the conkers looked like medieval battle flails . Flails are spiky metal balls on chains, used to wield heavy blows and cleave into armour.

Because a knight could swing a flail, it could deliver a much more powerful blow than it’s cousin, the mace (and it could also reach over, and around, armour and shields).

I have tried to include the idea of the tree having hands, and being loaded with weapons, in today’s haiku. Having read that the conkers are ready for planting when the casings are just splitting open – I squeezed that information in too!

You can read today’s haiku called “Horse Chestnut” here. I also read it out loud on today’s video blog. 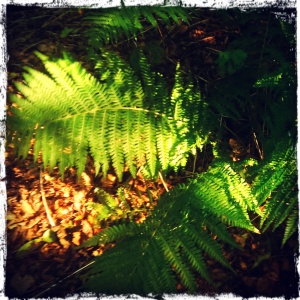 When I was out walking my dog in the woods last weekend, I noticed how the whole forest seemed to be turning from green to grey-brown. The colours of Summer looked like they were being washed away, from the sky downwards.

However, as I placed my attention on the ground, keen to see how all the mushrooms were getting on, my eyes were greeted by the vibrant green of moist, healthy ferns. It looked like the ferns were spreading themselves out in preparation for the imminent Autumn cooling ~ as if they were making some kind of promise to the forest floor to keep it warm.

Since my walk, I’ve discovered that many varieties of fern are evergreen. They seem to be the unsung heroes of many gardens, woodland areas, hillsides and parks. They are very undemanding, very colourful (even when everything else is fading), and they thrive in shady and damp areas.

I’ve tried to capture the essence of the fern in today’s haiku, which you can read here. I also read it out loud on today’s video-blog. 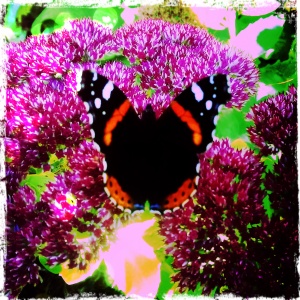 This morning I went for a walk with my dog in Portglenone Forest, near Ballymena. Sparky adores it there : I think it must smell really great 😛 (and there’s plenty of territory to be marked too!)

A lot has changed since last week. I noticed that the mushrooms have started to die away ; only the honey fungus is looking anywhere near healthy. The path is rusting with leaves, and our walk was punctuated by the sound of falling beech nuts.

In one part of the forest there is a hollow which catches the sun. In this area, it still looks and feels like Summer. Some Red Admiral butterflies were sunning themselves in the hollow this morning, and they allowed me to get really close with my camera. Even Sparky was mesmerised by them!

For me, “butterfly” brings up words like transformation, change, metamorphosis and regeneration. Butterflies make me think about Nature’s continuous, and repeating, cycles. Since my poetic adventure is all about marking the transition from Summer into Autumn, a haiku about the butterfly makes for a perfect inclusion in my collection.

You can read my haiku here, and I read it out loud in today’s video-blog too. 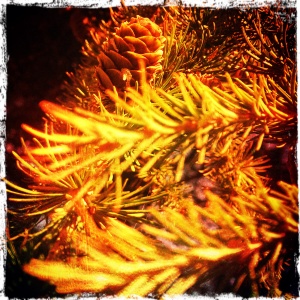 Today’s poetic adventure was inspired by the larch tree that is growing at the top of our road! In the summer, this tree was like a beautiful, elegant, youthful woman, but now her beauty seems to be fading.

It surprised me to learn that larch is one of the few conifers which sheds its needles in Autumn. This morning as I was walking my dog, I noticed how brown and bare some of the branches were becoming – and this observation prompted today’s haiku.

You can read today’s haiku here, and I read it out loud in today’s video-blog. (Oh, and in case you’re wondering exactly how big a collection of haiku poems is, it’s 30! We’re nearly there 🙂 ). 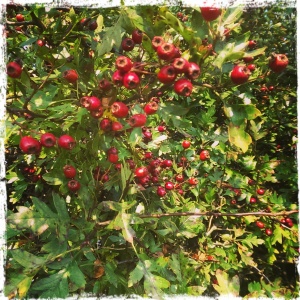 Today I was out on the farm and noticed how the hawthorn hedges are heaving with haws (hawthorn berries). A bit of research revealed that, according to Irish folklore, the hawthorn is thought to have powerful healing properties.

An infusion of the leaves, flowers or berries is thought capable of relieving anxiety and heart-break (of both a physical and emotional nature!). Some people suggest that it’s an effective “heart tonic”, giving relief to those who suffer from angina. Oh, and if berries are used for such an infusion, it is recommended that you wait until after the first frost which sweetens them.

So, today’s haiku is all about the hawthorn berry, and I’ve tried to reflect some if its medicinal qualities! You can read my haiku here, and I read it out loud on today’s video-blog too. 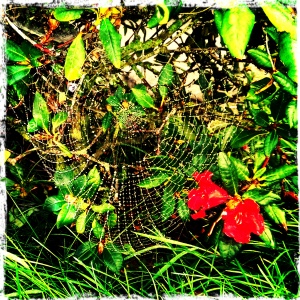 This morning’s walk with my dog was spectacular! Even though the sky was darkened by a flat grey ghost-mist, the hedges, railings, plants and fences were glinting with dew-laden spider webs. It was as though the spiders were putting on a spectacular show at the edges of morning consciousness.

Before writing today’s haiku, I did a little research about spider webs.  As a result of my research I learned where the term “cobweb” comes from. It turns out that coppe is the Old English word for spider 🙂 .

You can read my haiku about spider webs here, and I read it out loud in today’s video-blog.