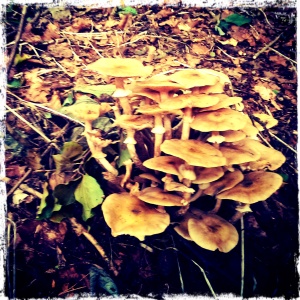 The Mushroom Muse has been rather impatient today ; she’s been weaving word-tendrils in my head all morning, sending soporific spores to my “regular work” brain and tempting me to the the writer’s desk. She’s good : she got her way.

My mushroom-hunting adventure has left me with a residual fascination for fungus (let’s face it, it could have been worse 😛 ). And, in my attempt to learn more about each of the mushrooms I spotted, it surprised me to discover that whilst some of them make for good eating, these very same mushrooms can eat the life out of other living things!

Today I’ve written a haiku poem about the Honey Fungus mushroom, Armillaria Mellea. According to my research, it is edible (after cooking), but it’s also a MERCILESS KILLER of trees. Those delicate wee honey-yellow caps sit on top of a huge weapon of mass destruction that lies just below the surface : clusters of rhizomorphs that look like boot-laces. (In fact, this mushroom is also sometimes called the Bootlace Fungus). The fungus spreads via these rhizomorphs and attacks trees, shrubs and woody climbers. Once it’s taken hold, sheets of white fungus material (mycelium) appear between bark and wood, and quite a bit of suffering ensues (in some cases, the bark even “bleeds”).

The root-like rhizomorphs can advance at the rate of up to 1 metre a year. The Armillaria  organisms are thought to be amongst the largest on Earth – there is one such single organism that is reported to be 3.4 square miles in size.

You can read today’s haiku here, and I read it out loud in today’s video-blog.